Why Do Vehicles Rust?

The red material in the image above is iron ore being mined from an open pit. Iron ore is red because it contains iron oxide, created when iron comes into contact with moisture, causing iron molecules to combine with oxygen. Rust is a form of iron oxide. A metallurgical process transforms the iron ore into steel used in the manufacturing of cars.

Unless protected, the steel that makes up a vehicle will return to its original iron oxide state.

This process is called ionization, corrosion or rusting. It is an electrochemical reaction that occurs when the iron comes into contact with moisture. The iron molecules combine with the oxygen as it does in nature. It is a reversal of the metallurgical process that turned the iron oxide into steel in the first place. 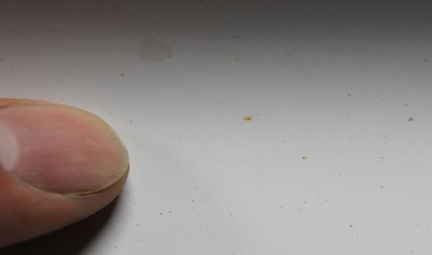 Although invisible to the naked eye at first, once the corrosion process starts, it is unstoppable without intervention. 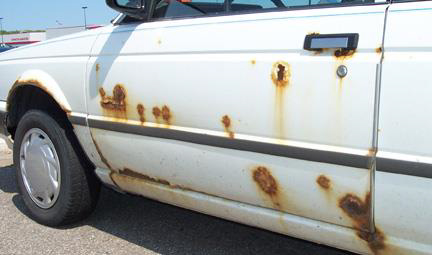 There are only two proven ways to protect metals from rust and or corrosion.

The oldest known method for protecting metals against corrosion is to coat the metal with oil or paint. Coating the surface of the metal protects it by insulating it from the moisture in the environment. As long as moisture is kept away from the metal, it will not combine with oxygen.

The modern use of spray coatings on vehicles presents three major drawbacks:

1. Coatings can only be used to protect the undercarriage and interior metal cavities in a vehicle. They cannot protect the outer painted panels of a vehicle from the rusting once a scratch or a chip exposes the metal.

2. Coatings applied to vehicles inevitably wear off and have to be reapplied at least annually in order to be effective. This makes them an expensive and time consuming choice.

3. Spray coatings represent an environmental and safety hazard for workers and people that come into contact with them. Traditional

Paint sealants for exterior paint and clear coat finishes are used and have great value in maintaining the luster of a vehicle’s painted surfaces. But they are not designed or intended to protect against rust.

Paint sealants cannot protect against scratching or chipping. And once the painted surface is violated, the exposed metal will begin to corrode. The relentlessness of corrosion as a natural phenomenon means that even a very small chip can lead to significant rust damage. 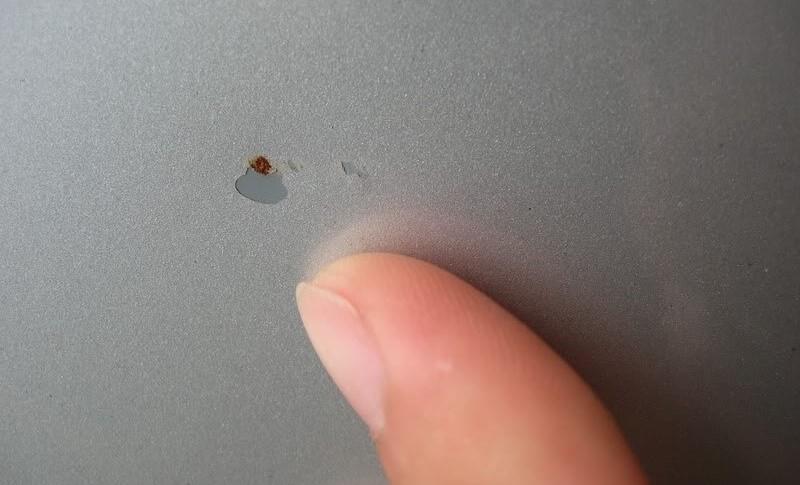 On its side the impact is the beginning of the corrosion cell exposing the iron beneath the coatings. Once in the presence of moisture it will rust. 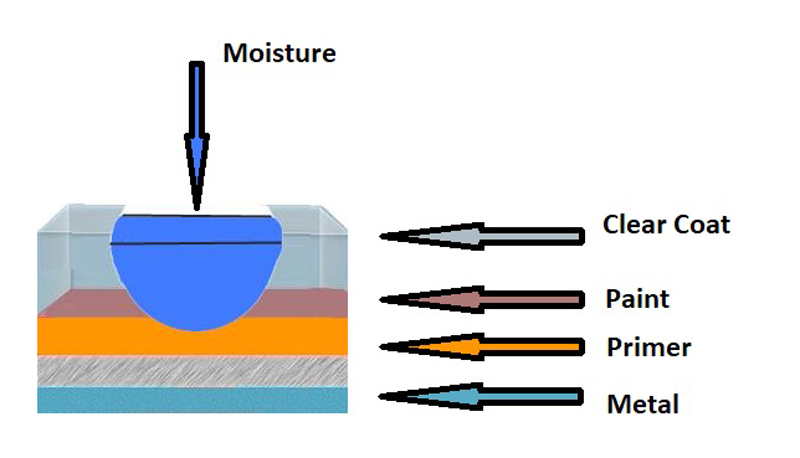 Cathodic protection is a method used to prevent corrosion of metals through the application of a DC current. Originally, this involved connecting a more easily corroding metal (“anode”) to the metal being protected (cathode). The anode acts as a "sacrificial metal" giving up its electrons (and corroding in the process) to the cathode, preventing the latter from losing its electrons and corroding. This type of cathodic protection is known as passive galvanic protection. The process is illustrated below: 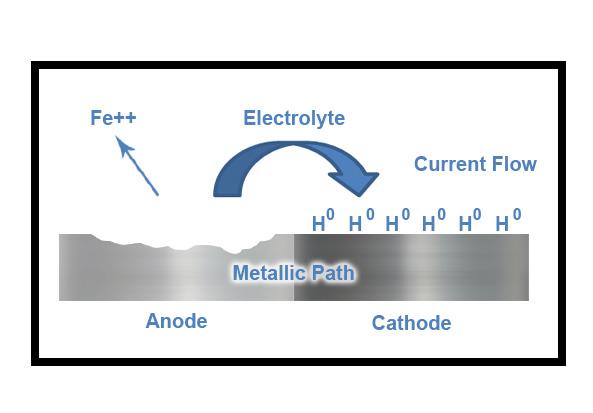 Impressed current cathodic protection or ICCP works the same way but instead of drawing electrons from an anode, the electrons are supplied to the cathode by a DC power source like a battery.

Does cathodic protection work on vehicles?

The Auto Saver System works by drawing a tiny amount of current from the vehicle’s battery and impressing into the metal through a contact point. The electrons from the current enrich the metal surfaces of the vehicle and serve to inhibit the corrosion of the iron molecules exposed to oxygen and moisture.

While initially met with skepticism, especially by suppliers of traditional spray coating treatments, the Auto Saver System has proven the effectiveness of its technology in protecting vehicles against rust in test after test over the last 20 years. Today, dozens of makes of cathodic protection devices are sold all over the world.

In order to ensure full legal and regulatory compliance, the Auto Saver carried out a substantiation testing protocol under government oversight. The test was designed by a corrosion engineer from McGill University and NACE member to determine if the Auto Saver System’s worked to inhibit corrosion in vehicles.

The test results show unequivocally that the Auto Saver System substantially inhibits the natural corrosion process on vehicles. These test results have been validated by leading corrosion engineers and scientists in the United States and Canada as well as by the Government of Canada.

It is now established science that electronic rust protection devices like the Auto Saver System are effective at protecting vehicles against corrosion.

Starting in 1996, the US government mandated that all vehicles be equipped with an on board diagnostic system. The system is accessible through a port or OBD port which allows technicians to access and analyze vehicle systems data.

Because the OBD port links directly to the vehicle’s battery and grounding system and is non-proprietary, many OBD devices have been developed for vehicles, including GPS, Wi-Fi and telematics.

Thanks to Auto Saver Systems, vehicles can now be protected from rust simply by connecting the Auto Saver Corrosion Protection Unit into the vehicle OBD port. 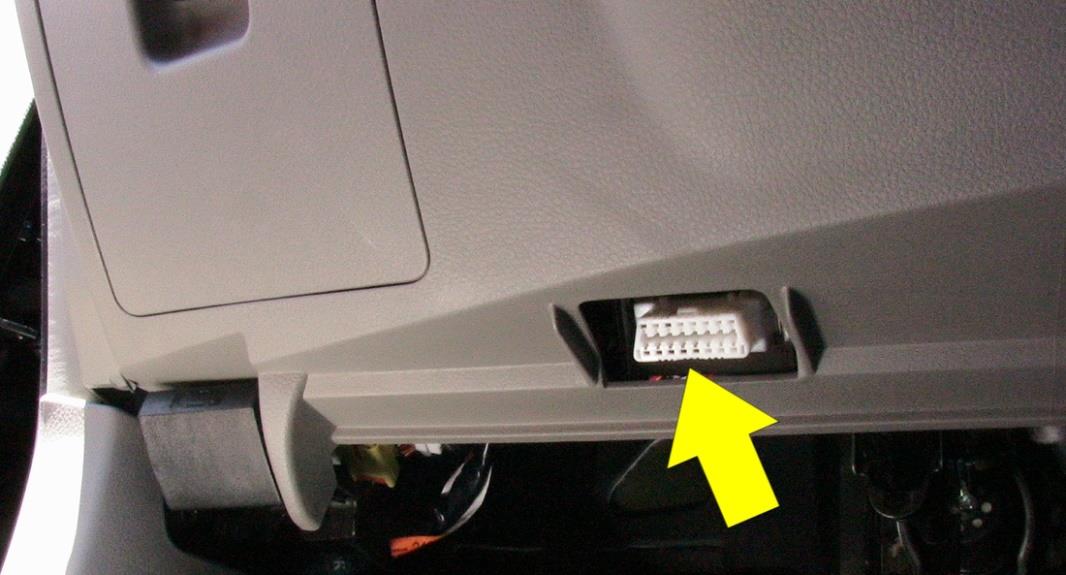 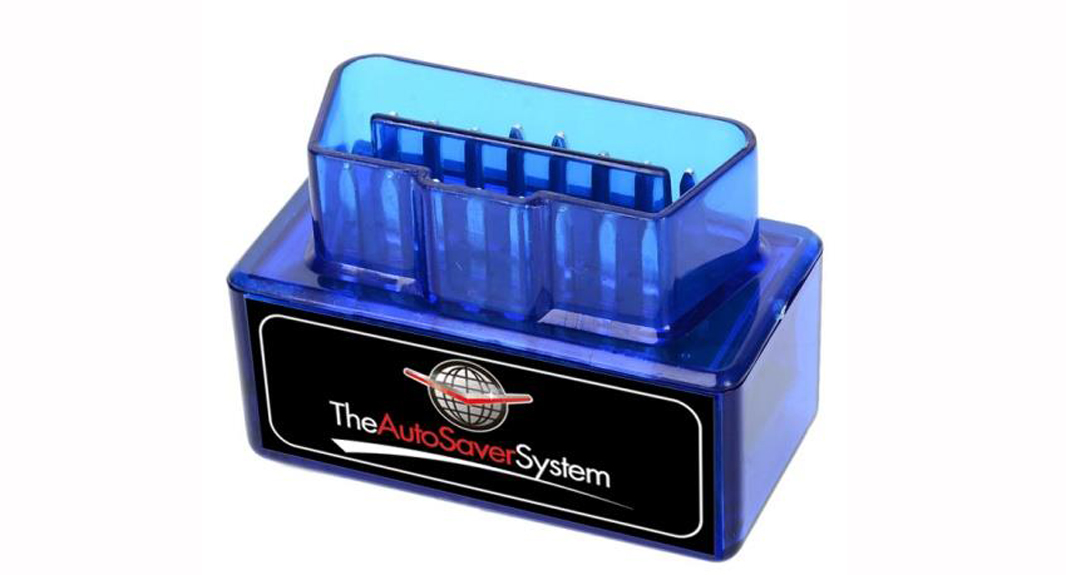 The Auto Saver OBD Corrosion Protection Unit delivers 24 milliamps of impressed current in order to cathodically protect the vehicle’s metal surfaces from corrosion. Auto Saver has designed and built a test apparatus to prove to the customer that the unit is delivering the 24 milliamps to the vehicle’s metal chassis. No modification to any vehicle components or disconnection of any power source is necessary. Simply use the OBD port to obtain readings on any unpainted, chipped, or exposed metal part of the vehicle. All other

No modification to any vehicle components or disconnection of any power source is necessary. Simply use the OBD port to obtain readings on any unpainted, chipped, or exposed metal part of the vehicle.

All other systems would have to disconnect the battery, allow the vehicle to cycle down its onboard electronics for several days. Then, and only then, could an accurate reading be obtained provided an amp meter is placed in the circuit as a shunt. You would still be unable to find current on any part of the vehicle past the shunt.

Publish the Menu module to "offcanvas" position. Here you can publish other modules as well.
Learn More.